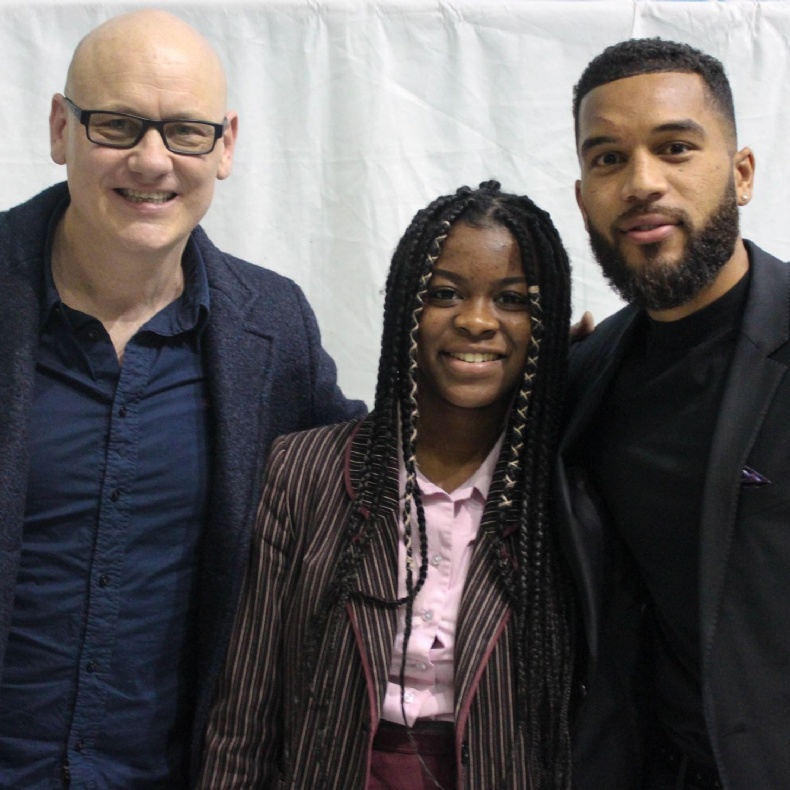 On Thursday 1st March The Harefield Academy hosted its annual Presentation Evening; despite the adverse snowy conditions brought by the ‘Beast from the East’, the staff and the students of The Academy worked tirelessly that week to keep the event running to schedule, so as not to disappoint the award winners, and what a night it was!

Twenty-eight students were celebrated and awarded on the night with a certificate and an Award. Each had a citation especially written for them about their achievement. The entire evening was a celebration of just how fabulous our students are and how great achievement can often come in smaller packages!

Our theme for the evening was #THAPROUD and this was reflected in the design of the evening, from the students' work displayed around the ground floor to the table names and biographies printed for each table  named after notable people in history who had a connection to Harefield Village. The evening was a demonstration of just how much pride there is in both the Village and The Academy.

Our guests were treated to not one, but two special guests: Adrian Mariappa Watford FC Player & Academy Graduate and Terry Alderton a comedian, Actor and TV Presenter, formally a footballer for Southend FC. Both guests spoke at length about their life experiences and offered their advice to our award winners on how to deal with life’s ups and downs.

Adrian Mariappa graduated through the Watford FC Academy before making his first-team debut in 2005 at the age of 19. He has now made over 250 first-team appearances and was voted the Player of the Season in 2011/12.

He has been a regular in the Premier League this season, putting in a string of typically assured performances in the Hornets defensive ranks.

Adrian has won 42 caps for Jamaica and after leaving Vicarage Road in 2012 for Reading, he then joined Crystal Palace in September 2013 where he made 49 appearances before returning to Watford in August 2016.

Terry Alderton is a comedian and former footballer who had acting and presenting roles in the early 2000s before returning to stand-up comedy a decade later. He began his career as a goalkeeper with Southend United; he later moved on to comedy. In 2004 Southend re-signed him after injuries weakened their squad.

In 1999, he was nominated for the Perrier Comedy Award. He then went on to present the National Lottery show Red Alert with Lulu later that year. In 2001, he hosted the Joy of Text with Ulrika Jonsson. He has also presented his own show on Capital Radio called Terry's Turnstiles and worked as a presenter on Setanta Sports News channel. He has appeared on the Comedy Central show Comedy Store.

Terry has also worked as an actor, one of his bigger roles was as the character Charlie Mead in the final series of London’s Burning. He currently presents a number of video shows on Virgin Media Sport; his characters include Mr Sheepskin and Danny Dire. He made his West End London début when he performed his one-man show at the Bloomsbury Theatre on 21 May 2010. In 2013, he joined the cast of Eastenders as cockney cab driver Terry Spraggen. He has also appeared in the feature film Keeping Mum starring Dame Maggie Smith and the television programmes, The Bill, Waking the Dead and Holby City.

Our guests were also treated to some fabulous music courtesy of our Sixth Formers Riya Kapoor, Connor Lowden and Matthew Smith, who also accompanied a beautiful tribute to our 3 former students Josh McGuinness, Harry Rice and George Wilkinson who passed away recently.

The spectacular gymnasts from Harefield Gymnastics Academy who never disappoint closed the show with another breath taking performance.

Many thanks to everyone who battled the weather to help host the event and attend on the night.

Our winners on were: