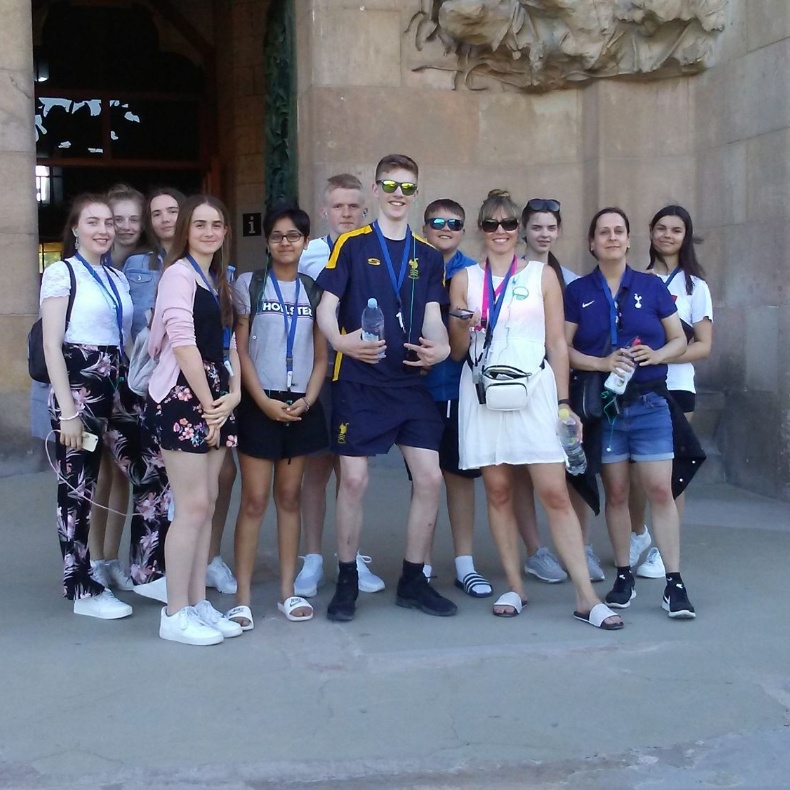 What a trip it was too!

As the half term was ending it was time for the MFL department’s trip to Barcelona! And what a trip it was!

After an early start we arrived into the beautiful city of Barcelona and made our way to see the quirky cathedral, ‘Sagrada Familia’, which was completely hiding its beautiful stain glass windows from the external viewings. The large unfinished Roman Catholic church in Barcelona was designed by Catalan architect Antoni Gaudi and its beautiful architecture became all the more apparent as we took a tour inside. We finished the day with a group meal and headed to the hotel to rest.

On day two many of the students were looking forward to seeing ‘Camp Nou’ stadium where the sheer size was not obvious until the tour was underway. We strolled through one area of the stadium to another, seeing the journey of Barcelona’s football team and taking pictures at our leisure. The view from inside the stadium was breathtaking and everyone had their favourite part of the tour and museum.

Later that day we took a walk to ‘el castell de montjuic’ where we hopped onto a cable car for the latter part of our ascent. At the top the views were magnificent! The deep blue sea and views over Barcelona from all area of the viewing ‘plaza’ were incredible!

We strolled down into the ‘castell’ and arrived some time later at ‘poble espaynol’ which was a new venture for all on the trip.  It is an open-air architectural museum approximately 400 metres away from the Fountains of Montjuïc. Built for the 1929 Barcelona International Exposition, the museum consists of 117 full-scale buildings, which recreate Spanish villages. It also contains a theatre, restaurants - where we dined that evening, artisan workshops and a museum of contemporary art.

On day three it was time to visit Park Guell, a public park system composed of gardens and architectonic elements located on Carmel Hill, in Barcelona. The architecture was out of this world. Being so busy we took the opportunity for some down time after this visit and headed to Port Vell for some souvenir shopping and an afternoon of volleyball and relaxation on the beach! Who could resist the gorgeous weather? The evening was finished with the favourite meal of the trip ‘tapas tasting’ where some students tried new tastes which is always lovely to see!

On our final day we were sad to leave but happy to be seeing our loved ones, so we had a nice lunch together and finished with some last minute shopping to spend any remaining euros, then it was ‘Adios Barcelona - hasta la próxima vez!